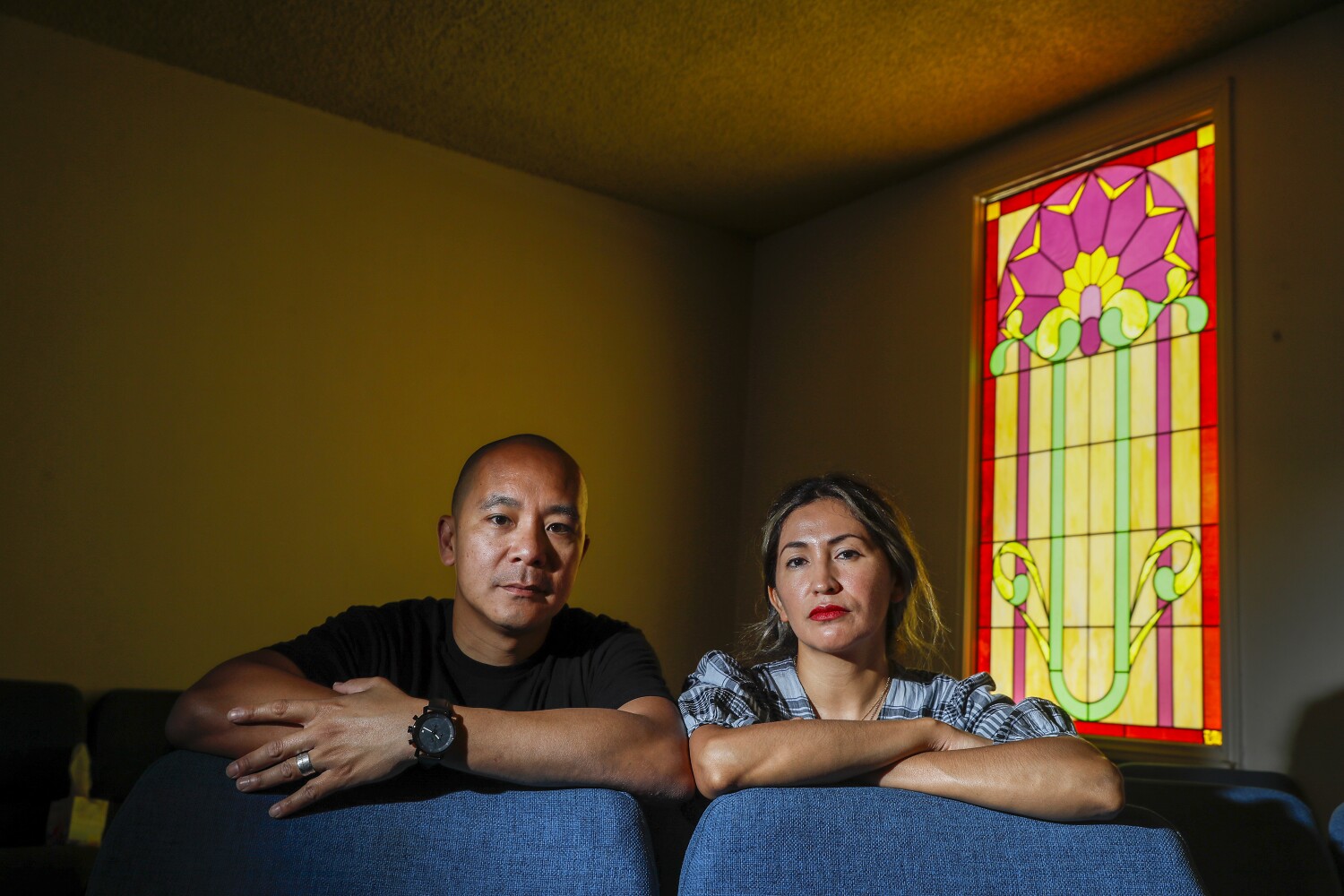 More than 8,000 Southern Baptists will descend on Anaheim next week for the annual meeting of the largest Protestant denomination in the United States — the first time in 41 years that the two-day meeting has been held in California.

The gathering comes just weeks after the release of an explosive 288-page report commissioned by the Southern Baptist Convention (SBC), that found allegations of sexual abuse were ignored or covered up for nearly 20 years by senior members of the SBC’s executive committee.

In painstaking detail, the third-party investigators at Guidepost Solutions describe how leaders minimized or disregarded survivors’ reports of abuse, appeared more concerned with protecting abusers than victims, denigrated survivors as “opportunists” or worse, and made avoiding any risk of legal liability for the SBC the top priority.

“The survivors with whom we spoke perceived the totality of these actions as a pattern of intimidation,” the authors wrote. ”Moreover, this poor treatment likely had a chilling effect on other survivors coming forward to report abuse.”

The report was commissioned by the SBC executive committee at the 2021 meeting with the support of an overwhelming majority of delegates from Southern Baptist churches, known as “messengers.” It was spurred in part by a 2019 investigation by the Houston Chronicle that found more than 700 survivors of abuse perpetrated by hundreds of pastors, deacons, Sunday school teachers, youth pastors and others associated with Southern Baptist churches.

Time has been set aside at the 2022 meeting to discuss the report and next steps, and messengers will vote on whether to adopt some of the authors’ recommendations. These include establishing a new task force to implement sexual abuse initiatives, and the creation of a “Ministry Check” website that would list credibly accused offenders associated with SBC churches to prevent abusers from easily moving from church to church.

To understand how individual pastors are processing the report ahead of the annual meeting on June 14 and 15, The Times reached out to P.J. Tibayan, 42, lead pastor at Bethany Baptist Church in Bellflower. Tibayan has worked as a pastor since 2002, and as a Southern Baptist pastor since 2008. He started at his current church in 2014.

Tibayan, who has one son and four daughters, asked that his wife Frances Tibayan sit by his side for the interview. She’s a survivor of sexual abuse and has spoken about it publicly.

This interview has been edited for length and clarity.

Were you surprised by what was revealed in the Guidepost report?

I was not surprised, only because my wife warned me this would be coming for our churches, and because this report is the end of a three-year conversation and not a report out of left field.

How did you feel reading it?

A mixture of emotions. Anger, sadness, fear for myself. I’m a sinner who feels the pull of temptation just like anyone else, and I need Jesus to save me from my sins just like everyone else. I wanted to scream. I was angry at the people who were doing it. I was feeling remorse and thinking what could I have done differently. Guilt. It was a roller coaster of emotions.

What part of the report was the most difficult for you to read?

Reading about the pastor [former SBC President Johnny Hunt] who is credibly accused of sexually assaulting another pastor’s wife. I wasn’t surprised because I know people do that, and anyone is capable of doing that, but I don’t think I’ve ever read a play-by-play of how something like that unfolded.

Seeing that grooming, and how she froze, and didn’t know what to do. I had these conversations with my wife — how do we help our daughters not freeze? That was the hardest part to read as a parent, as a pastor and as a sinner who is susceptible to temptations just like anyone else.

How did you talk to your congregation about it?

We have a Google group email that goes out to all 141 of our members. I sent them the whole 288-page report when it came out, and whenever I’d find a good summary I’d send it and tell members, “Read these things, pray and text me or email me your questions.”

The following Sunday evening I started by summarizing a piece I’d written for the website SOLA and talking about righteous anger, self-examination, lament, corporate responsibility and action. Then we had a Q&A and I asked a few people to pray whatever prayer God was leading them to. They were prayers of lament, sorrow, anger. Just talking to God with raw emotion and processing.

What kinds of questions came up?

The last question was along the lines of should we stay in the SBC or not. Other questions I encouraged them to ask were about me as a pastor. “Do you have questions about my integrity?” “We have four pastors in our church, do you wonder about any of us?” “Do you wonder about our children’s ministry?”

Our church is not new to this. We have a process of making sure our members know about reporting and things like that. But I’m like, hey, this is a time to ask fresh questions, because you can’t read a report like that and not think, “What about my leaders?” And as leaders I don’t think you should be offended by that. That’s fair game.

Does your church have a process for reporting sexual abuse?

We have a few different things we do. J.D. Greer, the 2019-20 SBC president, wrote an article about how to get help for sexual or domestic abuse, and we put that in our new member packet. We updated the hotline numbers to L.A. County and Orange County, so you don’t even have to report to the church. You are free to tell the leaders too, but you don’t need our permission to report it.

Also, when I do the membership interview, I do ask people about their own history, just to make sure they know I have resources here. I’m not saying you will be counseled by me if you are female. I’m your pastor, I want to know, but only so I can point you in the right direction. I just need to know you are getting help and that you are processing.

We also have a lot of sisters who have their radar up — who kind of know if someone is hurting in a certain way.

Is that standard in most Southern Baptist churches?

I don’t think so. I think it’s increasing. One reason it’s unique to us is because of my wife’s situation. And, in one of my previous churches, when I was a staff pastor, I had to confront someone in the church about this. I think that shaped me too, to be more aware and not so naive. I’m still fairly naive in many ways, but not in comparison to many pastors.

Did you talk to God about it?

Did you get any answers?

Certainly I cried out to the Lord, asking the Lord why. But I think when someone asks why there are different levels to that question. There are the intellectual reasons like, give me a rationale. And there is also just the heartache of why — the affliction, the crushing emotional weight. I think I was asking more from the latter, heartache cry, as opposed to the rationale.

Also, as I pray, it seems God may be using this report to awaken pastors and churches of all denominations to take reports of sexual abuse more seriously, to guard their people and children more vigilantly, to care for survivors more compassionately, to do justice more courageously and to walk with Him more humbly.

Your church is not leaving the SBC. Why?

When people ask why we’re not leaving the SBC, I remind them that the reason this report is out is because of the SBC, because the few, handful of people who were bottlenecking reports about abuse were overturned.

At the same time, we’re not blindly following the SBC forever. If they decide to go in the wrong direction, we are happy to pull out. It’s not a nonnegotiable for us to stay Southern Baptist.

What reforms do you want to see the SBC make?

There are two recommendations from the sexual abuse task force that will most likely reach the floor to vote on next Tuesday. One is to start an administrative entity to study and implement the most effective recommendations and actions. The second is the creation of a public database that would include those who have been credibly accused of sexual abuse.

I would also love for us to make restitution for survivors who have been maligned publicly and dismissed consistently over the years.

What do you think will happen next week?

Everything I’m seeing online, the back conversations I’m having, the Zoom calls we’re having — I think 90% are going to vote to approve the resolutions. But all it takes is 50% plus one for it to pass. I would be shocked if they don’t pass.

I’m hopeful, but I’m not blindly assuming it’s going to happen. And again, we’re ready to reevaluate as pastors of our church and with our church family whether to pull out if things go south.